Since last year, the U.S. witnessed two major “blackout” events. The first took place in August 2020, when California was gripped by a harsh heatwave leading to a surge in electricity demand and limited power imports into the state. The result was days of rolling blackouts in the entire state of California that sometimes lasted for hours at a stretch. In the second instance, it was the region of Texas, Arkansas, and Louisiana that witnessed an unprecedented spike in electricity demand amid a historic cold snap during February, this year. And the result was very similar to the first incident— the states experienced frequent blackouts for a few days. Needless to say, despite some basic differences in their nature, both the blackouts had severe impacts on the population. 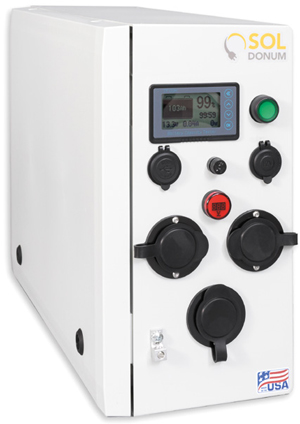 Clift Briscoe, Co-Founder and Chief Product Designer
For the pandemic-gripped working-from-home U.S. population, the blackouts not just disrupted their daily lives but also hampered their productivity. Even many small businesses, which were generally not well-equipped to handle acute blackouts, felt a strong ripple effect.

Now, while some might think these incidents to be rare occurrences, the reality is a little more worrisome. Over the past few years, the frequencies of blackouts in major U.S. cities have only increased. Recall those pesky, short-duration blackouts and brownouts in the last few months that you might have either experienced or heard of. Leading climate scientists are claiming the occurrence of such blackouts will become recurring with the ongoing climate change crisis. The U.S. utility sector is already scrambling to reinvigorate the aging electric grid systems, but it is undoubtedly going to be a lengthy and resource-intensive overhaul. So the most pertinent question right now is what can consumers do in the meantime to ensure they are not perturbed by the blackouts?

Preparing for the future starts now…

Many utility industry thought leaders believe that the ongoing concerns around the blackouts are setting up the stage for broader usage of energy storage systems. When used in parallel with the traditional electric grids, energy storage systems can provide backup power to the consumers in case of a blackout and help them operate independently of the grids. “With much of the U.S. population still working from home and no quick means of fixing the national electrical transmission systems, a smart move for energy consumers would be to invest in portable power backup systems,” opines Clift Briscoe, a reputed thought leader in the energy storage sector, and the co-founder of Sol Donum. However, Briscoe points out that there have only been three types of energy storage systems so far to choose from: low-cost lithium-ion batteries, diesel generators, and expensive longterm power reserves. Each of these systems comes with its own shortcomings when handling a blackout.

As we realized that Vulcan was the missing link between lithium-ion batteries, diesel generators, and industry-grade power backups, we decided to bring it to more people, which led to the inception of Sol Donum

While lithium-ion batteries and generators are already limited in their capacities and effective only for a shorter duration, generators produce additional toxic and harmful chemical compounds. The third alternative, industry-grade power reserves, remains extremely expensive for the average U.S. household to implement despite being a cleaner and long-term solution.

Interestingly, to untangle this Gordian knot, Briscoe came up with a unique solution. Backed by his years of experience in designing, developing, and implementing hardware systems and software systems for the U.S. Department of Defense and Intelligence Communities, he orchestrated a portable, modular, and turnkey energy storage system called Vulcan to fill the gap between commercial-grade power backups and traditional small-scale home batteries. The early success of Vulcan inspired Briscoe to commercialize the energy storage system. “As we realized that Vulcan was the missing link between lithium-ion batteries, diesel generators, and industry-grade power backups, we decided to bring it to more people, which led to the inception of Sol Donum,” highlights Briscoe.

“Under the hood of Vulcan’s excellence lies three words: ‘Engineering. Efficiency. Innovation.’ These words permeate every aspect of the product and its company, Sol Donum,” chimes in Sean Curry, chief marketing officer at Sol Donum. The company’s pride, Vulcan, is designed and engineered as an automated system capable of storing large amounts of energy and operating within a wide range of environmental conditions. What distinguishes the Vulcan power backup system from other similar products is the provision for large amounts of energy storage, fast charging capacity, and split 120V AC topology for generating and redirecting grid energy. “Our battery technology is designed for daily charge and discharge, and it is tested to perform reliably for over 5,000 cycles, retaining 80 percent of its capacity after 10 years. This is why we call it energy systems for life,” quips Curry.

The Vulcan energy system consists of a portable inverter-charger that can operate as a standalone unit utilizing its internal 105Ah battery for 120V AC energy generation to offer 2KW of filtered power output. Users have the provision of storing this energy within portable self-charging energy storage units that Sol Donum dubs as Energy Stores. Each Energy Store has a 500W or 1000W solar charger and a 360W or 600W AC charger. And these units can be easily daisy-chained together for increasing the storage capacity by 2.6KWh or 3.6KWh increments.
All the produced energy is stored safely in the Energy Stores’ high-energy-density Lithium Iron Phosphate batteries (LifePo4), which can be consumed for days or weeks without recharging, albeit depending on the appliance usage. Besides, to ensure appliance safety, the unit has provisions for reverse voltage, short circuit, and overload protection in the energy storage component. “So, in case of an energy surge, our product has the capability of filtering the power output, ensuring that your appliances are not damaged due to power fluctuations,” shares Curry. “We have kept every minute detail in mind while designing Vulcan.”

Notably, the Vulcan energy backup system can cater to a wide range of user bases ranging from working-fromhome individuals and small business owners who deal with perishable goods to quick-service restaurants in need of maintaining their food products. During the long hours of blackouts, these users can enjoy an uninterrupted power supply without having to invest massively in other power backup systems.

The Vulcan power backup system can also be used during road travels, camping, or off-grid living. “We are moving toward a future dominated by the work-from-home culture, and soon we might have people working out of their country houses or recreational vehicles. Vulcan is designed keeping this future need in mind, and it will have no problem adapting to the changing work culture,” states Larry Chang, co-founder and chief operating officer of Sol Donum.

Moving ahead at full throttle, Sol Donum is now gearing toward the mass production of Vulcan while simultaneously working on a highercapacity version of the energy backup system. “We are also looking at both international and domestic channel partners to push our product in the European and Asian markets,” says Chang. At the same time, Sol Donum is determined to leave as little carbon footprint behind as possible. Therefore, Sol Donum is taking proactive steps in making sure that none of its Vulcan products or components end up in a landfill and planning to offer a tradein rebate for clients looking to replace any used Vulcan in the future. Through the trade-in rebates, Sol Donum will have better control over its energy storage products, ensuring they can be refurbished, upgraded, or recycled effectively. And as these ambitious plans come to fruition, Sol Donum is poised to open the doors to battery energy storage for more people and help reduce fossil fuel dependency. “Our long-term goal is to make the world more sustainable in terms of energy usage— one user, one home, one business, and one village at a time,” concludes the Sol Donum team.

Description
Sol Donum provides affordable, renewable energy solutions for emergency preparedness and enabling life off-grid. The Vulcan energy system consists of a portable inverter-charger that can operate as a standalone unit utilizing its internal 105Ah battery for 120V AC energy generation to offer 2KW of filtered power output. Users have the provision of storing this energy within portable self-charging energy storage units that Sol Donum dubs as Energy Stores. Each Energy Store has a 500W or 1000W solar charger and a 360W or 600W AC charger. And these units can be easily daisy-chained together for increasing the charging capacity up to 2.6KW or 3.6KWh 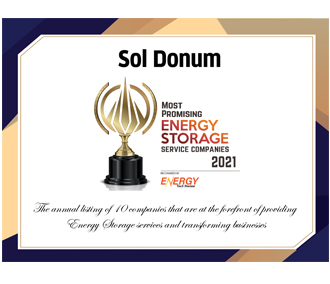