Yuriy Vlasov, the founder and CEO of Watts Battery, worked for a major oil and gas company when he realized that the way people exploit fossil resources to produce energy is harming the atmosphere and putting the future of humanity at risk. He quit the corporation and dedicated his life to making solar electricity affordable and creating a user-friendly solution for shifting to renewable sources with ease.

The first step is to generate energy, but solar batteries are not affordable, and an owner doesn’t get the real benefits of them. The home storage could be a link between a generator and a platform for selling green electricity surplus. This is the way to convert a household into a mini powerplant and get an additional revenue flow.

With this idea, the project of creating portable energy storage began. “Just in 5 years, we made the journey from the TRL 0 prototype to the market-ready TRL 9 stage product driven by the mission to increase the efficiency of energy consumption and help people to switch to renewable energy sources, not spending a fortune on such storage. WATTS BATTERY is affordable and allows an owner to make money and return the investment faster. It's an investment both for the household and, in the future, for humanity,” says Vlasov.

Watts Battery has built the most compact and powerful, scalable, and easy-to-use, smart, portable energy storage that combines all the functionalities of a large, stationary energy storage system in one transportable case. The product focuses on end customers who are inclined to save cost by using solar energy and looking for a backup power source while staying mobile to become energy-independent. Watts Battery sells its devices as a solar integrator to residential and small commercials.

The "power plant" fits inside a briefcase-sized box and requires zero programming skills. The system acts as a standalone power backup, and users can attach the solar panel directly. They can further plug the system to charge it and the appliances they want to secure through the sockets on the box. “You do not even need to call a licensed electrician for that kind of installation,” adds Vlasov. The system could be connected to Watts Battery cloud, which provides software updates and residential demand response revenue.

People who buy this solution, in many cases, experienced problems with energy grids in the past. One customer, for instance, was facing blackout issues, and the power outages were happening two-three times a week. The electrical capabilities in those territories were not stable. Since last autumn, the client has been using the Watts Battery system, and five other customer's neighbours have installed it.

Just in 5 years, we made the journey from the TRL 0 prototype to the market-ready TRL 9 stage product driven by the mission to increase the efficiency of energy consumption and help people to switch to renewable energy sources, not spending a fortune on such storage. WATTS BATTERY is affordable and allows an owner to make money and return the investment faster. It's an investment both for the household and, in the future, for humanity

Detecting a power outage and switching to the WATTS system happens in just a fraction of a second (0.05 sec). All connected appliances continue working as usual, and this switching time is in order of magnitude faster than any other modern generator with an auto-start functionality.

The company is also focused on CO2 reduction and balances out its carbon emissions due to its equipment production. Within two to three months of the product usage, the amount of decreased CO2 emission due to switching to a renewable source will compensate for the CO2 volume generated by the manufacturing of one device.

In 2018, Watts Battery received the B Corp certification. Later in 2019, the company was labelled by Solar Impulse Foundation as one of the 1000 Global Efficient Energy Solutions. The firm showed its prototype in December 2016 in Europe and Helsinki and another one in May 2017 in New York. Watts Battery released the final prototype at CES, January 2018, developed the market-ready product, and prepared production facilities for serial manufacturing. In 2019, the company tested the market, acquired the first customers, and sold its product in ten countries. “We received valuable feedback to finalize the product and prepare it for full production,” adds Vlasov. Watts Battery significantly revisioned the product at the beginning of 2020, and when the pandemic hit, it invested its time in design and features improvements. By September 2020, the firms presales were $2,5Min emerging markets, including the African region and 6 month from productions start it delivered more than 300 units. Watts Battery has also partnered with an extensive manufacturing company to launch its products in the US in 2021.

Description
Watts Battery is a smart, portable energy storage that combines all the functionalities of an extensive, stationary energy storage system in one transportable case and has the potential to monetize the green energy surplus generated by a household 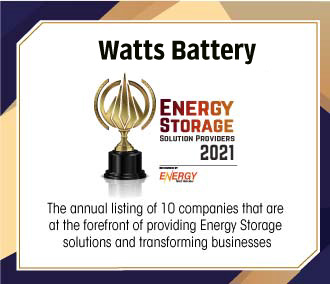